The Book on Antimony

This book is also titled Dancing with the Black Dragon. This is the first-ever glimpse inside Robert Bartlett’s own lab notebooks documenting his alchemical path with antimony. This book can be used as a practical lab manual, and it also contains the historical documentary evidence of the emergence of the Black Dragon.

Twentieth century alchemist, Frater Albertus, planned on writing a work titled, The Book on Antimony, which, to my knowledge never manifested. The book was to spark interest in preparations of antimony for medicinal use based on spagyric and alchemical principles. In the transition of alchemy to modern chemistry, many valuable ideas, techniques, and products were pushed aside to make room for updated approaches. In England, discussion of alchemical topics was discouraged and later banned in meetings of the Royal Society in favor of the new model of chemical principles. Soon, alchemy disappeared as a bad dream of our ancestors and those who could understand its methods were spread far and few between. There have always been alchemists working in the shadows through time. Frater Albertus pulled alchemy out and into the light on a global scale, as a legitimate avenue of research into new medicines and materials. Part of his research involved preparations of antimony, based especially on the writings of the alchemist Basil Valentine in his Triumphal Chariot of Antimony which first appeared around 1604. Frater Albertus hoped to gather enough information together on how to prepare antimony in a variety of ways to produce powerful agents unknown to modern medicine, and also to accumulate as much analytical information on the products as possible so that medical evaluation could more easily be suggested. He taught much of this technology worldwide for many years. I studied and worked with Frater Albertus for about ten years and the book before you presents a documentary of the teachings on antimony I have been able to collect since 1973 based on his initial guidance. So this is my version of The Book on Antimony; I think Frater would have been pleased.

I was never sure how best to present all of this information but in the end decided it was best to start at the beginning and unfold the information as it was presented to me. The alchemists called antimony a Black Dragon; this is the story of my involvement with antimony, my dance with the Black Dragon.

Antimony is not subject you hear about very much these days and yet antimony has been with us for centuries as a medicine, a pigment, as a flame retardant, it is used in matches and fireworks even as a semiconductor in modern electronics. In times past antimony was a subject of wonder and miracles as well as scandal.

How to use this book

This is a book of practical laboratory alchemy, but also a historical documentation. Along with some narrative and commentary, the bulk of this volume consists of scans of pages right from my personal notebooks gathered over the last 50 years. Reference notations are generally provided in the upper right corner of note pages where applicable.

The first part chronicles how antimony was introduced to me from the alchemical perspective and the results of practical works stemming from that introduction. The last part is a compendium of works using antimony, with instruction, photographs and some analysis of materials and products.

You can of course read cover to cover and see how antimony was revealed to me or skip through to a subject or process of interest at any time as a reference. I think most of the scans are clearly legible and I wanted to get them scanned before many of the pages start to fade with age. Without circumlocution or holding back vital details, I present this information in hopes that future workers on antimony preparations will have a strong foothold to make rapid advances; it does no good just sitting on my bookshelves.

This is the first of several books on alchemical laboratory works distilled from my collected notes (which I call the Corpus Spagyricus) planned for later release. 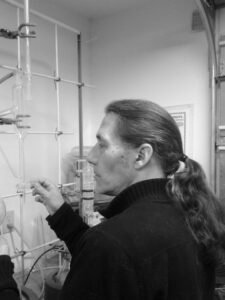 Robert Allen Bartlett is a practicing alchemist and author. A natural born scientist, Robert’s interest in geology and the sciences in general prompted him to construct his own home laboratory when only 9 years old. Roberts interest in the ancient use of natural materials lead him to the study of alchemical works at the age of 12 and it has become his lifelong passion. In 1974, he left San Jose State University to pursue an intensive course of alchemical study at the Paracelsus Research Society (later Paracelsus College) under the guidance of Dr. Albert Reidel (Frater Albertus). During this time, Robert lived in central Idaho where he performed personal research on botanical materials and worked underground mining antimony (an important alchemical resource). By 1976, at the prompting of Frater Albertus, Robert returned to college at Boise State University to complete his degree in chemistry with the view of working at the newly formed Paralab, a commercial offshoot of Paracelsus College. During this time Robert lived in Boise and was employed as a geochemical assayer for the mining industry. In 1979, he received his B.S. degree chemistry and immediately began work at Paralab as Chief Chemist. Working closely with Frater Albertus, Robert researched and developed a wide range of mineral and metallic preparations following Western and Eastern alchemical traditions for applications in alternative health care. Later, Robert was selected by Frater Albertus to become a Director of Research at Tristar, the future vision of Frater Albertus which would combine the Paracelsus College, Paralab, and a Healing Arts Center into one complex. Unfortunately with the death of Frater Albertus in 1984, both the college and Paralab closed its doors and the Tristar dream was never realized. Robert’s pursuit of alchemical research never diminished, as he continued his chemistry career as a research scientist for new ceramic materials, then later as the Chemistry Department Manager for a large materials testing laboratory. In this new environment, he was able to document and perfect alchemical experiments in ways undreamed of by the ancient alchemists using the very latest in scientific instrumentation. Robert is currently living in the Pacific Northwest with his wife and two daughters where he has been teaching classes and giving workshops on practical alchemy since 2002. He is an instructor with Flamel College. He also produces a line of spagyric and homeopathic mineral salts under the Terre Vitae label. He is the author of Real Alchemy and Way of the Crucible, as well as two articles for the Verdant Gnosis book series (vols 1 and 3). Temper of Herbs is his third book, and The Book on Antimony is forthcoming with Revelore press in 2021.