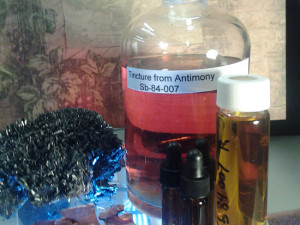 The Metallic Oils have reported effects throughout history as told by the old Alchemist’s throughout the Centuries.  We are not encouraging their use in any way internally or making any medical claims. These uses are informational and historical only!

THE OIL FROM ANTIMONY- Basil Valentine called it the Savior of the World. The Universal Medicine.  Antimony was used to cure various ailments and Cancers. It was used to remove toxins from the body as well and sweats it out.  The Unfixed tincture was used for this most often.  the Fixed for Chronic conditions.  It has the ability to purify gold and was used in Fire Assay to remove impurities from the Gold Ores.  It’s affinity with gold gives it similar effects on illness and was often combined with gold oil .  Antimony also boosts the effects of other tintures when a few drops added. Some claims were that it was a rejuenator of youthful vigor and renews all the Saturn ruled areas of the body. Spagyrically prepared and tested, all toxins are removed from the Antimony through lengthy process and extraction so that mercury and arsenic often found in the mineral are removed completely.

THE OIL OF GOLD- The Ancient Egyptians revered it as a Heart, Blood and Brain tonic. Rejuvenating and purifying .  It also was used for Cancers. gives the user long life.  The Egyptians also used it as a builder of the Light Body.  It has affinity to the Sun , and Leo and the Heart Chakra.  Will, Creativity, Vitality and Strength.  All associated with the Sun and Leo.  Reports of curatives for chronic conditions such as MS, arthritis and Hep C.

OIL FROM SILVER- Has been used as a restorative for the Brain and Nervous system.  Bringing calmness and improving memory.  It is associated with the Moon, and Cancer the Crab, Associated with the Past and bringing the emotions into balance, enhancing Psychic abilities,Flights of Fancy,   and Astral Travel.  It was claimed a curative for brain and memory malfunctions.

He recomends one drop per day for seven days and then once a week for a time.