ALCHEMY AND ASTROLOGY, THE SISTER SCIENCE 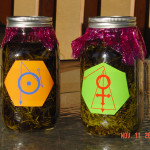 Astrology is commonly known as a means of portent. Of
telling what events may happen to you at any given date and time.

It is also more commonly known as your local newspaper
entertaining personality guide to the signs and stars.

Astrology as been a lot of things to a lot of people both on
the superficial level and the spiritual level.

For the student of Alchemy, it is a tool to map out the
aspects within yourself that need to be digested and calcined to attain the
Alchemical Gold.

One cannot do the Work on only one level or it is
incomplete.

Our concern is not on the personality level although we will
touch on those aspects. Our concern is on the incarnating Soul of the person we
are reading or in ourselves.  Therefore,
this type of astrology known as “Karmic Astrology”, focuses on the unit of
incarnation and what kind of “work” needs to be done to ascend on the ladder of
incarnation. It also shows what we are most comfortable with. What ingrained
habits do we have from previous incarnations.

This type of Astrology is a wonderful tool for self
development no matter what discipline you may subscribe to.  For any professional counselors it is also a
great tool for gaining an almost instant insight into your clients problems and
tendencies and what needs to be fixed. I became fascinated with this aspect
back in 1983 when I was seeing a psychologist for some personal problems that I
was having and she asked for my birth information.

When I asked why, she told me that she casts astrological
charts for all her clients as it gives her a good insight into the therapy
needed.

Shortly afterwards I met Lari Mangum through a mutual
friend.  I called him and arranged to
have my chart prepared and read by him.

I was totally amazed by what the reading entailed and wanted
to learn more about this type of astrology that examined the Soul and the Work
that it had before it.

I later signed up for Lari’s class. It went on once a month for nine months.

I still consider myself a student as there is always
something to learn.

Why would such and old and seemingly silly pseudo science
even work you might ask?

Well let us say that everything is connected.  We are a part of everything from the carpet
you are walking on to the blade of grass in the field, to the cow or horse that
is eating the grass. And so too are we connected to our solar system, our
galaxy, everything ad infinitum.

Now, at one time, all this would seem so much
psycho/spiritual mumbo jumbo. Many have quoted Carl Jung and his Synchronicity
Theory.  All well and good, this is quite
valid really.

But for those of a more scientific bent, how does this
apply?

Well with the advent of Quantum Physics, many assumptions
about reality are found to fall apart as you dig deeper into the nature of
matter and consciousness.

From Quantum Physics arose the “Unified Field Theory”
amounst others.

Science has indeed confirmed that Matter as we know it is
composed as the Ancient Alchemists maintained, is all of “One Thing”.

Hermes Trismegistus wrote on the Emerald Tablet in Egypt,
“As Above, So Below, As they Universe, So the Soul, As without, so Within”.

This Axiom is proving to be true today in many ways.

Science and Mysticism are getting married in the Quantum
World.

Suggested reading would be “The Dancing Woo Li Masters”, by
Gary Zukav ,God and the New Physics, and The Holographic Universe, by Micheal
Talbot. For Alchemy I recommend Robert Bartlett’s books, “Real Alchemy”and “The
Way of the Crucible”,  “The Alchemist’s
handbook”, by Frater Albertus, “Herbal Alchemy”, by Junius Manfried, as well as
“The Idiot’s Guide to Alchemy”, by Dennis William Hauck

So, everything is connected. Micheal Talbot takes this even
further in his Holographic Theory that shows how everything works no matter
what piece of the whole that you look at, because we are actually looking at
one giant hologram. That is why many alternative modalities work. Why you can
do acupuncture on your foot or your ear and have it affect the corresponding
organ or condition in the body. So too why you can look at someones relation to
the horizon at birth and determine all sorts of things about that person,
including health conditions and predispositions.

“Each one of us represents a consensus or aggregate of
vibrations, a sum total of those present in Nature at the time we come into
birth. Indeed it is what makes birth possible. A certain rate of
vibrationsmanifesting at that particular time and a corresponding result is
produced”

So now that I’ve expressed some theories. Let us proceed now
to the Signs of the Zodiac and  what they
mean.

THE SIGNS OF THE ZODIAC

The horizon is divided into twelve pieces or slices of a
pie. At the time and place of your birth, you are considered the center of your
personal universe and the horizon is laid out around you comprising your birth
or natal chart.

The natural zodiac consists of the slices going in order
from house number one which is the sign on the horizon counterclockwise to
house number 12.

The natural rulerships of the houses and signs are as
follows;;

FOURTH HOUSE; RULED BY CANCER, PLANETARY RULER IS THE MOON

FIFTH HOUSE;RULED BY LEO, PLANETARY RULER IS THE SUN

ELEVENTH HOUSE RULED BY AQUARIUS,PLANETARY RULER IS URANUS
AND CO-RULED BY SATURN.

There are three basic symbols in Astrology.

The Circle, the Crescent, and the Cross

The Circle is that which is boundless and eternal, the
source the “True Self”

It is the Ouroboros, the Serpant swallowing it’s tail.

The Crescent is the Personality, the little “i”, the outer
aspect of Being.

The Cross is the Cross of Matter, the four directions, East,
South, West and North. The Living Earth.

The Sun is the Eternal Self, that which is Immortal. The dot
in the center of the circle is the Spark of Life and  Consciousness.

The Sun= Basic
Drive for Significance, The Will, Male
Relationships in a female chart, especially the father.

Strength of Body and Spirit, The Heart and Spine in the
physical Body.

Leo the lion. Ruled by the Sun

The Moon, is the Personality. It has no light of it’s own
and reflects the Sun.

The Ebb and flow of the Emotions.

Mercury is the Messenger of the Gods, the Bridge between the
Higher Mind and the Lower or Monkey Mind.

The link between the Sun (Self) and the Moon (Personality)

Ruler of Gemini it bears the glyph of personality carried by
the Circle of the True Self.

The personality is turned upward and open to take in
information and knowledge and transmit it to the True  Self which lies beneath. Both rest upon the
Cross of Matter.

Venus is Beauty and Love, personal love as opposed to Higher
or Universal love as it’s higher octave reflects inNeptune

It is vanity as well. It is the Mirror of Isis and the
Symbol of Life. The Circle of the Self is held up by the Cross of Matter

Mars is Desire, Passion, Self Will, Combat. The Male force.
The glyph of the Self striking outward through the arrow of Truth. Straight to
the point. This is why Mars ruled Aries has a hidden gift, being the first
force out of the death of Pisces, Aries can go straight to God when liberated
from the lower self or little “I”

Jupiter has the glyph of personality poised on the cross of
matter in the horizontal direction. The glyph is in motion, expanding in different
directions. Jupiter is expansion It has that effect wherever it is in the
chart. In the first house it can expand your appearance, sometimes in ways you
don’t want. In the second house it will expand your wallet which can be a good
thing.

Uranus is the cross of matter intersected by the circle or
self. The Self pierces through the veil in sudden insights and Knowledge.
Uranus is the Higher Octave of Mercury embodying the Higher Mind and Universal
Knowledge. Natural ruler of Aquarius.

Saturn is the cross of Matter weighing down the glyph of
personality. Saturn is the Lord of Karma, the great Teacher and Tester. Some
called him Satan. The Gift of Saturn is in its hidden teaching. The lead of the
Alchemist must be turned into Gold of the true Self and so Saturn weighs down
the personality until the true Spirit is strong enough to break free for the
lesson of Saturn is that it cannot harm who you truly are, only the outer
trappings which must be broken down and digested and calcined so that the true
King can emerge.

Neptuneis the glyph of
personality pierced with the arrow of Truth. Neptune
is the Higher Octave of Venus and is universal unconditional love. Where it is
placed shows the need for empathy and compassion . The Personality or lower
self must die, be pierced by single purpose to go straight to the higher
realms. It rule Pisces which is the Death of personality or soul journey
through the zodiac. The Omega where Aries is the Alpha and the cycle begins
anew. The serpent swallowing its tail.

Pluto, Plutonium, is the co ruler of Scorpio along with
Mars. Pluto represents deep transformative Power. Wherever it is in your chart
is where you need Redemption. Some serious closet cleaning and airing out in
order to uncover your true self and break free of the past. It is the Phoenix rising from the
ashes of it’s old life to a new and better one.

It is the Higher Octave of Mars which rules the lower baser
desires and pursuits.

Pluto has the glyph of personality turned inward facing the
arrow of truth.